I was perplexed when I first learned that Savannah, Georgia has the second largest St Patrick’s Day festivities in the USA.  “Really, Savannah?” I said to myself, “Isn’t this city a classic southern belle, with moss covered oak trees and historic squares?”  It wasn’t until I arrived in Savannah that I realized this belle has a wild side.  Although I wasn’t there for St Patrick’s Day itself, it quickly became apparent to me that there is something starkly different about Savannah than say the so-called holy city of Charleston, which we had just visited.

The realization first occurred to me as we were leaving our first stop, Moon River Brewing Company, Savannah’s only brewpub.  The bartender asked if we’d like anything to go.  Of course I assumed she meant a six pack or growler of the beer we had just sampled, which would be a typical question in a brewery.  Since we had about 3 to 4 fours of walking through Savannah’s streets ahead of us, we declined and went on our way.  Except as we made our way through town, every second or third person was walking around with a plastic cup….and they all looked peculiarly happy.  Well we may not be bright, but we’re not completely dim-witted and we quickly realized that public drinking is at least accepted, if not entirely legal, in Savannah.  Upon further investigation we learned that Savannah’s historic district is one of few places in the US where consumption of open containers of alcohol is permitted, as long as the container is plastic and no more than 16 ounces.  I was more than a little surprised, since I have always thought of Savannah as a fairly conservative city.  It may be that the vast majority of those indulging in this freedom of consumption are tourists, but nevertheless, it makes Savannah a much louder and…boozier place to be.

Now on to the main reason we were there, to check out Savannah’s moss covered oak trees and historic squares! Savannah’s 22 squares are all free and all very beautiful, with massive old trees, lots of green space, and various monuments scattered across them.  All the squares are in walking distance of one another so seeing all is certainly doable, but I would recommend starting at the waterfront and making your down Bull Street to Forsyth Park to catch some of the most significant squares and monuments. You will find monuments to a wide variety of historic individuals hailing from Savannah ranging from John Wesley, the founder of Methodism, to Juliette Gordon Low, the founder of the Girl Scouts. You can get a lot more info about each of Savannah’s squares here. 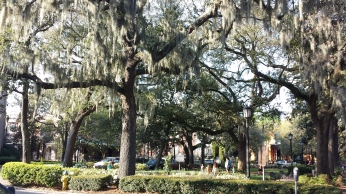 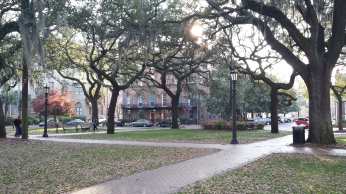 While unfortunately we did not really get to eat in Savannah because we were so stuffed with Charleston BBQ, I recommend you check out these great dining tips and also a top 10 list of things to do (both two parts) for great advice.  We did, however, stroll along River St and the waterfront and sampled some amazing freshly made pralines and salt water taffy.  While I could live without the taffy, the pralines are to die for — trust me on this!  You can’t miss the huge candy shop by the waterfront. 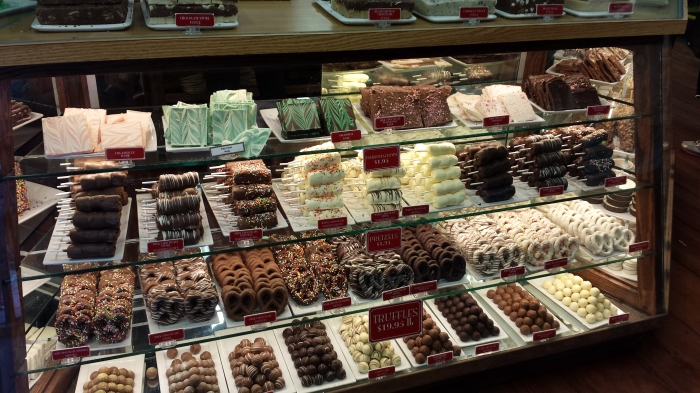 Rows and rows of delectable sweets

Have you visited Savannah?  Did anything surprise you?

5 thoughts on “Something a little surprising about Savannah, Georgia”